Slatherin’ sauce is a quince based savoury sauce with a unique bush flavour imparted by Australian natives spices – pepperberry, wattleseed and kunzea.  We have dedicated it to the legend of Tasmanian bush ranger Martin Cash.

Martin Cash ‘s Slatherin Sauce is fair dinkum ocka mate!  Truly Australian!
It has a quince base and contains three different Australian native spices – pepperberry, wattleseed and kunzea.
The result is bonza! By which we mean she’s a total rippa!
It has a complex and truly unique bush flavour distinct from any other savoury sauce on the market.  We hand harvest Pepperberry and Kunzea on Tasmania’s east coast.  Wattle seed is wild harvested in semi-arid areas of South Australia.  We harvest quinces from Hobart’s backyards through our own urban harvest project.

Our Slatherin’ Sauce has been awarded a silver medal at the Royal Hobart Fine Food Awards!

So who is Martin Cash and why is he on the Slatherin’ Sauce label? 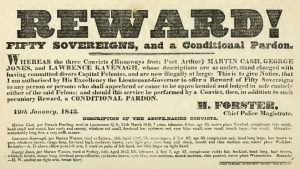 So glad you asked!  Martin Cash was a famous Tasmanian convict and bushranger of the nineteenth century. He was the first man to escape Port Arthur penal colony by swimming across the shark infested waters of Eaglehawk Neck. TWICE!!
He lead an adventurous life of crime, evading capture for years until he was caught and convicted for murder. However, public lament over this conviction led to it being commuted to a lengthy sentence on Norfolk island. It seems that his popularity and Irish charm may have saved him from execution!

He lived out his days on a small farm just north of Hobart until his death in 1877.

We’ve dedicated Slatherin’ sauce to Cash because his farm, Cash Cottage, is now a base for our little business!

Slatherin’ sauce makes a great bbq sauce. But it is also good in stir-fries and in curries along side condiments such as mango chutney.

There are no reviews yet.